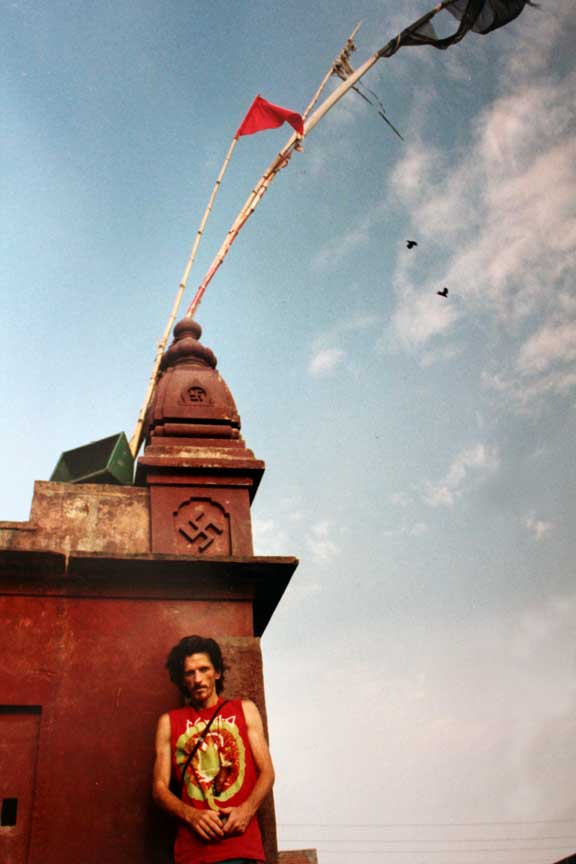 “From Kanya Kumari To Madurai  and  onto  Ooty Hill Station”

Took the Xpress bus, six and half hours and we travelled a mere 224 km to Madurai. Ah Yes, if there is any single city in India you should experience, I would have to say, it is called  “Madurai”, the twenty five hundred year old city that has a vast temple complex. We found our way here from a suggestion from Farmer Adbul in KK, that we had to make this stop on our way to Peryar Tiger Reserve along with a stop in Ooty. We arrived at two twenty in a stifling heat couple with centuries of dust and activity. We checked into the Devi Lodge next to the temple with a top floor room balcony overlooking the Sri Meenakshi  Amman Temple.

We slept till sunset, washed then went out into the circus that is Madurai. Ah what is this Indianoid merchandise shopping extravaganza, so what we done do is, avoid the temple merchants and went walking spreading our smiles far and wide to all and to every drug dung merchant trying his best to get us on the alternate life freeway. Our response to drug dealers was with a broad smile, nice and loud as they approached us and whispered and hissed, “ you want, (smiley face) I have. “We do not do drugs, we don’t want any of your drugs” shouted loud enough so every ear in the temple could hear us, and finally they went away, we decided that we would return in the early AM when all the devotees meet for puja.

A very disturbing moment occurred when we approached the temple. There at the entrance was a shackled elephant, with people giving it coins which it took with it’s trunk and deposited in a donation box. As we got close we realized that the elephant was crying huge tears that rolled down it’s face. I stood there comforting the elephant for a while but the pain, shame and powerless and my inability to help it was wrenching so we left to return later the morning. We scolded the mahoot who himself was powerless and agreed with nods while looking at the ground. We went home, slept till dawn and for dawn’s sake I took a great shot of the temple at sunrise.

Temple early, we found a secluded area in the temple statuary and sat in our most respectful Egyptoid  seated positions meditating.  We spoke to the temple bats, as they descended around us, we could hear the whispers of passers by as we slipped back a few centuries and fused with the stone. We could feel the flashbulbs on our skin as they took pics of the two freaky westies.   We visited the temple museum and got a photo of Sabrina holding Hanuman tenderly in her arms.

I have had this thing for duck billed goddesses, don’t know where it came from but I was exhilarated when I saw these buxom goddesses ridding ducks. The breast had been touched a million times, so I  enjoyed cupping my hands over some fabulous stone breasts. 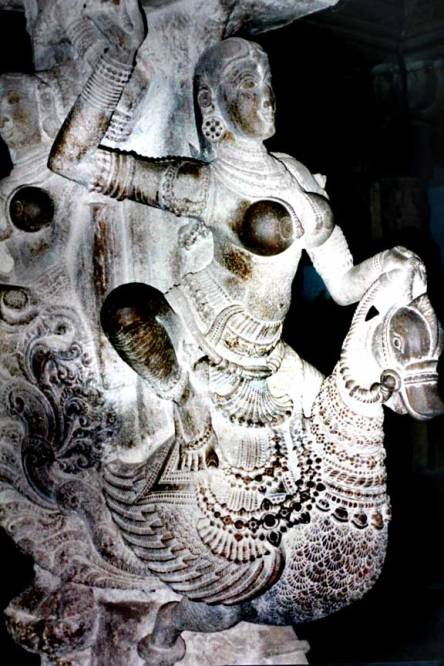 In the evening we checked out the Palace light show.

Oh my Queen your legs are like white pillars, cat a pillars, you should shave them sometime. So much for the palace tour, then went back to the temple to tape the musicians later  and met four lads at the ghat pool where earlier that day we had seen a jackal eat a freshly caught pigeon “snap dragon pop, crunch and birdie gone, ah my love of scavengers.

We returned to the temple to watch a sari auction and went off and settled on some steps. A young jackal approached us cautiously, as it got closer I offered it my hand and it began to chew on my for arm, not so hard as to break the flesh but firm enough that I was definitely feeling some pain. This went on for sometime, I finally was able to reach around with my other hand and start stroking it’s head, it slowly settled on my lap and was falling asleep, when an Indian business man in a white shirt carrying a briefcase came along and hit it with the briefcase.The animal jumped up it’s back up and snarling, I yelled at the man to go away, the music stopped and the man walked off mumbling under his breath. The jackal stuck around, but I didn’t want to go through that arm chewing again, my arm was throbbing and hot.

Temple musicians started up again, with a bed chamber maiden ritual with Big Bindi Babu on the Chennai and Skinny Puppy Gramps on the tablaa. Lots of spinning dervish like action and fan waving Indian women, with their intense dark eyes and beautiful wispy sideburns. We spent the rest of the  evening in the  (Shri Meenakshi) Temple watching an auction sale of high end saris, watching the auctioneer pulling 5 meters of cloth through a gold wedding band without any effort. Pretty impressive stuff.

Then off to the hot-hell room for a malaria odorous sleep. A yes did the BM for rups, we figured out that we could get more rups for our American cash on the black market. It was easier than all the fuss at the banks and much faster. Got my camera fixed, today, as we fell off to sleep, sweet dreams and Sabubu spoon feeding me sweet lassi dreams

We slept till 8 AM got up to chain shop for a lock shop and stamp shop and then train ticket shopping for Mudumalai Tiger Reserve. Sounds like a busy day and it was, usually you can only one thing a day here. Something odd is how shops are organized , all the chain shops are in one area of town.. chain shop after chain shop, or lock shop after lock shop.

We found a place for breakfast but first got some pics of the  boys down at the ghats swimming and  sound of Hindi Chant-O-Rama prayers over the loud speakers from the nearby temple. We will stop in Ooty for Sunday  and stay over. Went back to the hotel room and rented a cheaper place. Then back out for more photo opportunities trying to avoid the bhel puri crazy Jack that pops up when we least expect it and sticks to us for the day until we can loose him somewhere in the crowd. Now we are slapping the hand that begs us in Madurai, we call it the backsheesh high five.

We had a good meal at the College Station Lodge Veg Restaurant a/c room. It was a major westie concentration  with smatterings of  Hindus. At this point “Sabubu Love of India” is doing a doingy boingy sketch of me as a ferret in a tiger skin while a contingent of waiters look on. They give me the look of sincere condolence and the “Ah women, you can’t model for them, and they will sketch you in anyway they see fit”. Now boarding the train for Combatoire  where we will take the narrow gauge rail to the hill station at Ooty.

The overnight train to Combatoire was a snore fest. Sabubu bunked across from me on the top bunk, with two big guys below us. It was a rough rider and Sabubu didn’t sleep a wrinkle, she kept kicking the guy below her every time he started up snoring, this went on for most of the night, but then at around 4 am the symphony  of snores erupted and continued, at this point we laughed and looked out the window at the sun slowly rising. Arrived at Combatoire  at five AM which was brutal as we made our way to the closest chai chai chai man. The leper, the beggar and the mummy got tickets on the Ooty express steam train, it was quite the eclectic crowd. The engineer approached me on the platform and asked me if I wanted to ride in the engine, Sabubu had to sit in the colourful sari clad ladies in the women’s car.

The engine pushes the train up the mountain, and the reason soon became apparent as we entered the first tunnel. In an instant the four guys shovelling coal and the engineer where hunched and turned away from the fire box, I barely had time to turn and duck inside my flannel shirt. Had to put a cinder or two out, and got a burn on the elbow but I did get some great pictures. All the soot, dust from the tunnel, black smoke, and thumb sized cinders rushing in all directions made the slow ride up the to the hill station that much faster. Gave 100 rupees baksheesh to the engineer who told me he earns 900 rups a month for this searing brink of hell work, making the trip two times a day, 10 hours a day. Sabubu got a bouquet of flowers from the boys in the lady car, and she talked  the young boys  into giving her a foot massage. The thrilling slender white foot of a young western girl must have been really hot stuff for the boys.

In Ooty we went to Reflections, it should have been called Retractions. It was everything you wouldn’t want in an Indian lodge. It was colonial British bed and breakfast, in your face, with a rule book of do’s and don’ts and too expensive.

It was so cold we shakespeared all night and in the morning as the sun rose we found a warm spot on the bed and curled up and slept a bit more. The night before we went to a Barbary Coast a pseudo  Chinese restaurant which we retreated from and went across the street to another Chinese Indian restaurant, it cost so much and we got so little. We also bought pigment from a gentle soul who furnished us with our India pouch furniture and ankle adornments. The streets are filthy with the residue of the days activities, and people in the shadows milling about.

Always someone watching you, you never get a sense of being alone, those little peeping eyes will glisten in the dark for an instant if your alert enough. Little fires with rag wrapped people huddled around, horse tied off in front of a candy stall and  liquor stores every fifty feet.  Drunk Hindus, is a very strange sight, and they do get out of control, I’ll have to get back to you on that. Cold, cold, so cold. elevation 5,576 ft above sea level, went to the lake and hugged a 1000 year old tree, Sabubu found a feather, we yapped with farmers and locals who spoke Victorian english all proper and reserved, a colonial India anachronism,  pre Gandhi awareness, in a British Colonial Disneyland. We set our sites on the tiger reserve and got our tickets to move on.