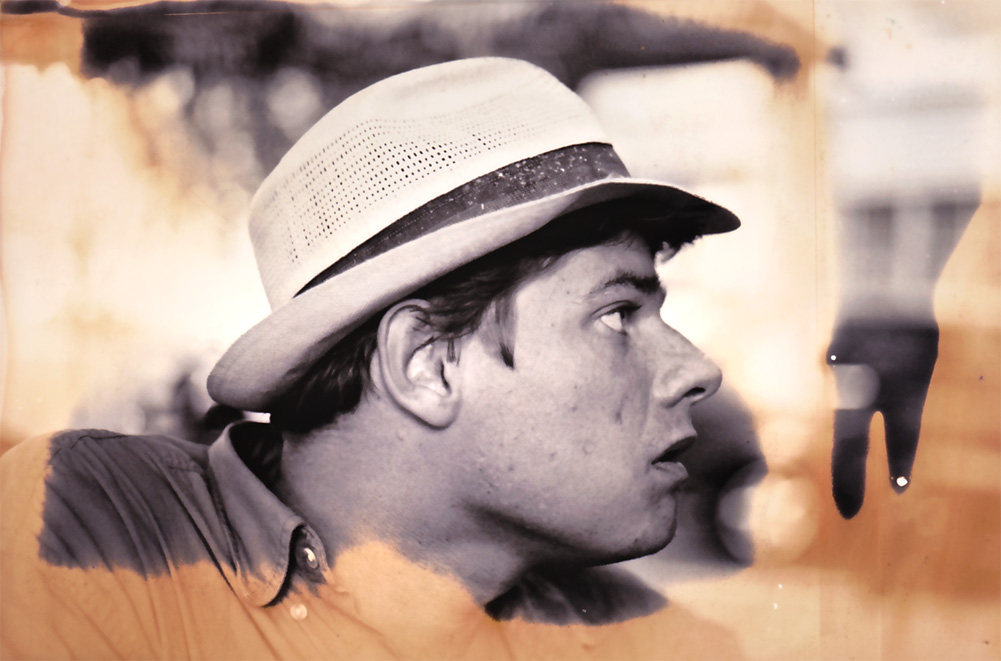 I started writing this and stopped myself, how could I consider myself a friend of Sylvain Gerard. I knew him and I stayed at his studio on Le Boulevard des Dames in the spring of 1995, but in that brief six weeks period we covered we had an quite an intense period together, a sort of Van Gogh, Gauguin in Arles experience. Meeting him came at a pivotal time in my life, and he played an important part in what lead to a new outlook on my work and daily life.

In the months that preceeded my trip to Marseille, I had met Anna Bogyghian in Toronto who spent most of her time traveling from one global art hub to another. During those winter months Anna told me all about Marseilles and the art scene, and how I could fit in with the work I do,  Anna gave me the name of Sylvain and his phone number and told me to call him, as soon as I arrived. With hardly no money I left for Marseille, and when I arrived I called him, he was busy finishing work for a show opening at Jean Pierre Allis’s Gallerie Athanor. We agreed to meet at the gallery on the following day, when I came in the gallery  I was so impressed by how much command he had. A powerful figure, in a wheel chair pulling these large charcoal drawings along the floor trying to decide what goes where. Everything stopped and Mr Allis told me the gallery was closed, I told him I was there to meet with Sylvain, and they went back to there discussions. At one point Sylvain decided he wanted to cut one of the two by three meter drawings, and argued with Mr Allis who insisted him not to do so.  Sylvain asked me to cut the drawing  and well, artists have to stick together, so he directed me with Mr Allis looking on in disbelief. I believe this is the point where we bonded, I really understood his sense of urgency with his work and I completely understood why the drawing had to be cropped. We left and went and had lunch and brought him up to date on Anna and where she might be right now, Cairo, India, London.. from that point on we spent almost everyday hanging out together.

I never had liked charcoal, because I had been introduced to those whispy twig sketches from art school, but  when I looked at Sylvain’s drawings the black spaces where absorbing and sucking in the light at an amazing rate, far more affective than any pigment. The white spaces where impeccable, no evidence of charcoal dust or erasure, simply the sparkling white of the paper, amazing. Metal looked like metal, and stone like stone and the subject matter poetic, tough,  I remember the large drawing of an angel sitting at a table, solitary, having a cigarette in a vast stone building. In the vast surface of the drawing the sparkling white of the cigarette, the battered dimly white wings of the angel.

At his studio, he had  a scaffold to enable him to crawl up and work on his massive drawings, he showed me the charcoal he was using and gave me a  few sticks to try out; it was Faber Castelle Siberian Fir charcoal #12. Something I would soon discover is hard to come by unless you live in Zurich. Years later I found ten boxes of it in an art store in Fort Lauderdale and I bought all the boxes, the clerk said, “ funny, every time we get that stuff in someone comes along and buys all of it”.

I had my show at La Gallerie Palinure, all the time spending my evenings at Sylvain’s hanging out with his friends and drawing. We would sit around drinking and talking, I couldn’t  follow all the conversation so I would draw. Sylvain would look over from time to time and critique me on the work, I really was bad at it. This charcoal was unforgiving, where ever it touched the paper it left an indelible mark, there is no default position. I started using both hands to draw, accepting the my finger prints where my signature.

After a performance I did at the Trolleybus, I was asked to leave my lodgings with the Budhist lady so I moved in with Sylvain at Les Grand Domaines on Le Boulevard Des Dames.

That’s when I was able to watch him work and talk drawing and art history till the wee hours. I slept on the couch in the main studio with large charcoals looking down on me, I absorbed the passion Sylvain had for the line and I learned to trust and let the charcoal tell the tale. Sometime I would awake to find him drawing me on the couch.  I always liked drawing with other people on the same drawing and so  I got Sylvain to give it a try. We ended up arguing and with Sylvain  an impassioned argument could easily turn physical so it was tense at times. He was very serious about the drawing and as we drew on the same page I would draw things that made his drawing look funny.  We almost came to fists on that but after a while we really laughed it off. I think it was the first time he had simply drawn, I use to draw and crumple drawings and throw them out, while he cringed and would rescue them and critique them. That’s what I remember about him, the level of passion for his work his hyper focused commitment, it kept him alive and I could see that this was his one focus to a fulfilling life. When we went to bars he often was banned so our options where slim, we would end up in Algerian restaurants drinking and eating.

In that month, I learned so much about the city of Marseille and all the most famous and infamous artists of the twentieth century that passed through that amazing city. What I learned from Sylvain created an indelible and beautiful mark on my time there.

It was the night before I left for Paris for my flight home, Sylvain suggested he come to Paris for the day, he would then go on to visit his mother. He suggested we could go to the Louvre, he told me it would cost nothing for the train ticket because he’s in a wheelchair so one ticket would be free. Crazy as it sounded I just wasn’t ready to say goodbye so the next day we boarded the train for Paris. I don’t know about today but in 1995, trains did not accommodate wheel chairs very well; it was a very brutal insight into the hardship people with disabilities face everyday. We arrived in Paris and after breakfast headed to Le Louvre, the policy was people in wheel chairs do not have to wait in line to get in, so within minutes we were inside. Sylvain had been there many times before and knew all the back corridors and private elevators for the building so I had a unique glimpse at one of the world’s most famous museums. We spent the entire day there, discussing paintings with him showing me his favorite Courbet paintings, and the Rembrandt side of beef painting and stopping by the Mona Lisa which had sixty or so people crowded around it, Sylvain told me “ don’t worry about seeing it, it’s over rated, and you will be disappointed”.

In the month together we had covered a lot of pain together about his early childhood years, scars about abandonment by his father. In response we had given each other allot of hope and support and love. Today realizing he’s gone is a very sad day indeed, I always thought somehow we would have a chance to have a glass and laugh and argue again.