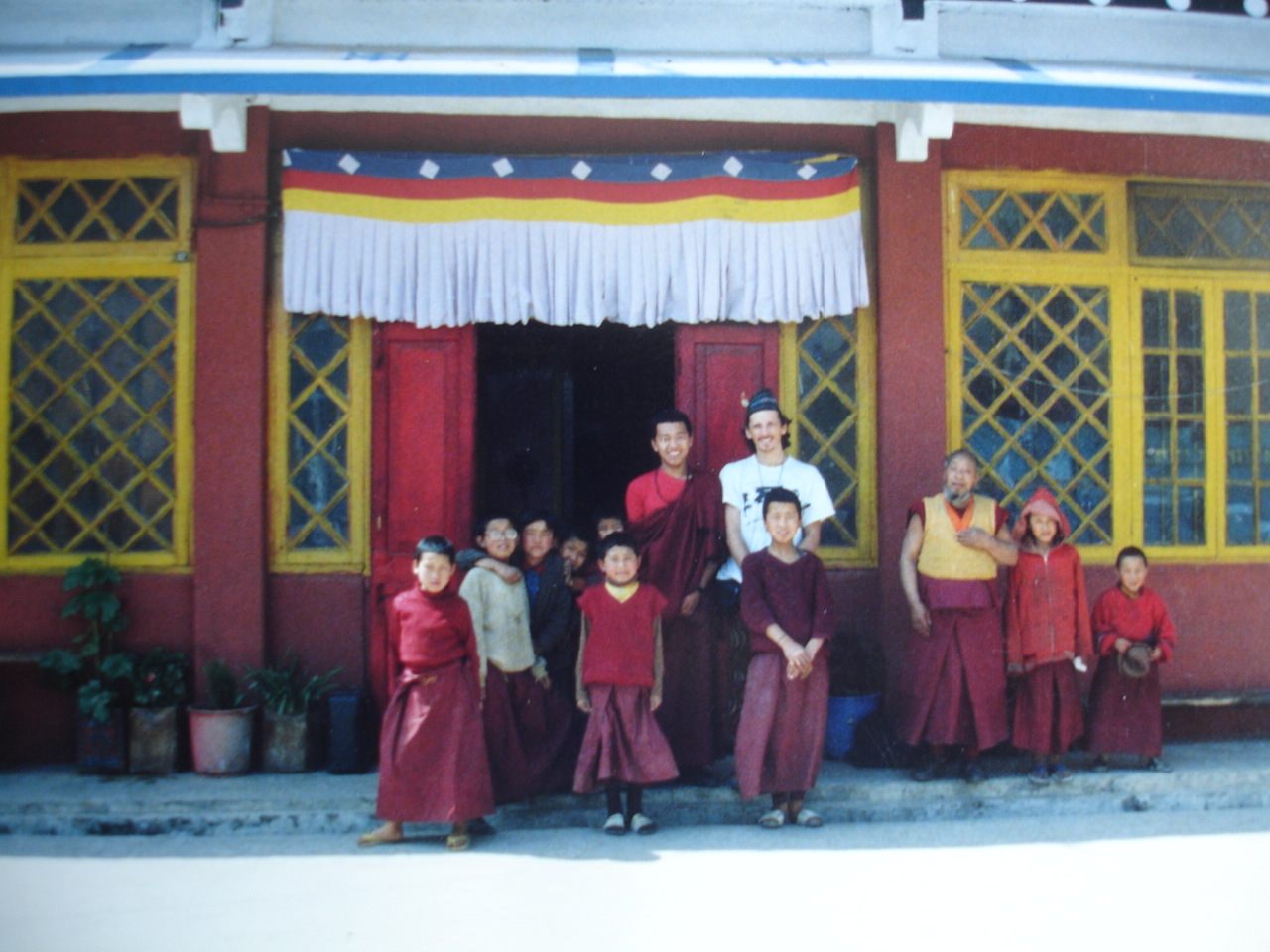 Well until now we had this dream like high regard for Tibetans, because we hadn’t met the inn keeper of the Hotel Tara who turned out to be a complete A-hole when we had the audacity to mention his place was dirty and how we froze all night. He went ballistic on us with a tirade of Tibetan which we couldn’t understand but got the message as he shoved us out of his hotel.

We were able to get another room at the Prestige, a bit more upscale, then we did a shopping spree in Darjeeling, hats, and a cool rat boy brand knife, tea cookies, and chatahs to keep the cool night air off our shoulders, just simple things to have to make ourselves feel good. We followed that up with a meal at a Tibetan restaurant, and we discovered the momo pie and soup. A young girl gave us our Tibetan lessons, and upon returning to the Prestige, the ole Tibetan grandmother had a good laugh at Sabagee’s seventy rupee hat. Cold night, huddled tight in a spoonish sleep praying for sunrise.

Tomorrow is the annual march marking the thirty second year of exile for HH the Dalai Lama and marks the beginning of the occupation of Tibet by the Chinese. We got up before sunrise and went to get a view of Mount Kapunchanga at sunrise; its peek is twenty three thousand feet. We then went onto Ghoom via a backroad and we stoped at the Aloobari Monastery, but nobody home and so the monkey and the tiger continued onto Ghoom. There by the railway station I found an eagle feather as this nineteen year old monk named Thapkhe, came up along the road to show us the way to the Guru Shakya Monastery. At first he was reserved as he led us up the steps behind a house, with some women washing laundry on the steps and others hanging it out to dry. Then we continued through the gates into a courtyard and as I came up I tripped and fell, and a young boy monk asked, “Where are you going? And I answered, “Yes, where am I going? Sabu and the monk, Thapkhe laughed as I looked up from the ground in the monastary courtyard. A group of young boys ran out and we were lead to the main part of the temple, one old lone monk sat at the back with a cymbal and twirly drum doing a rampant beat while he recited his prayers from a long horizontal prayer book, as he flipped pages he never missed a beat he looked over and smiled. Thapkhe showed us all the various altars and murals painted eighty years earlier. We then made an offering and were ready to leave when the monk in prayer motioned Thapkhe to have us sit and have some butter tea and bread. A very typical food eaten by the monks, especially when they travel, both items are easy to make under most severe conditions and are sustaining and nutritious.

The butter tea was a bit salty, nothing I could easily gulp down, it leaves you smacking your lips, I guess it’s Tibetan lip gloss for the harsh sunlight at these high altitudes. We told them of our journey and they told us of the monastery life for young boys and the education system, parents who cannot afford to educate or care for there boys send them off to monastaries. All of this went on while the lone monk resumed his prayer, then without loosing a beat, in his prayer he said goodbye to us. We walked out and Sabu took a photo of me in front of the Monastery.

We made our way over the hill past a Gurka Military Outpost and stopped in the local graveyard. We decided to stop to rest in the sunlight; we found a spot away from the gravestones on the side of a hill and laid down to rest. I fell asleep and when I awoke I had something in my hand. When I examined it closely I realized it was a human finger bone, I only recognized it because I use to have a fossilized finger bone in my bones and stones collection. I laid it down and realized I had been lying on a grave.I didn’t remember my dream but remember it being very peaceful sleep. Slowly in the late afternoon the fog descended, hiding all the snow capped mountains. At this time of year the fog descends from sunrise to ten thirty or so, then returns at sundown for a few hours. In the evening I drew while Sabubu did her meditation.

We got up at six to catch the sunrise at Observatory Hill were we met Tony and Linda, he was from London and she was from Wisconsin. They had completed the eight day trek to the base camp of Mount Everest. They looked very thin and rough, obviously spent from the trip we went for breakfast together and exchanged information about Nepal and the does and don’ts. We then separated ways, we stopped at the homeopath for remedies then home for washing clothing and sewing a package for the GPO; all along we have been creating care packages of things we don’t want to carry with us and shipping them by sea post. You had to get some cotton, a sewing needle and some strong thread. You start by putting your things in a small box and then wrapping it in brown paper, after which you wrap in cotton and sew together. Then at the post office you can use the large brush with the ink pot to write out your street address. We used the return address part to fill in with an alternate address in Canada, just in case it didn’t make it to the first address. Went to GPO to drop off our package where the post office agent melts red wax onto the threaded areas and impresses the local postal seal into the wax. We then do a short prayer for safe journey bidding it farewell an safe journey for three months in the hull of a ship, through time to ourselves on the other side of the world in the future. The agent respectfully watches patiently as we do our parting prayers.

Then went to the other side of the mountain for clothing drying in the tall grass and letter writing, sketching and sleeping in the sunlite. Later we did the rupe exchange on the BM for extra cash. In the evening we went for a typical Nepali meal, a pungent non exotic, non Indian meal with basic dahl and rice, on the way home at Observation Hill we were treated to a pan, by the pan man. It was a cool blustery night as we watched him make it, taking a beetle leaf and smearing it with tar like goo, then laying lines of spices and beetle nut shavings, then looking up and smiling and putting other mystery ingredients none of which I could identify. It took a lot of chewing and struggling not to have it pop out of my mouth out onto the street. After twenty minutes of hard chewing I was still trying to break it down, I don’t think my teeth could benefit from the continued use of pan. It was interesting and enjoyable but nothing I would go searching for. In the afternoon we went to the Himalayan Mountaineering Institute to get maps and information on treks, we also bought some badges.

Next to it was a zoo, the sad Darjeeling zoo, a large cartoon like iron bar cage held a Siberian tiger. His head was as big as my torso, I was mesmerized by his size and power and it lay there panting. I walked up slowly taking care and stood a few feet behind it’s head. He yawed and the size of his mouth and his incredible fangs made me step back. As it yaned and leaned back looking at me, in it’s eyes I realized he was extremely pissed off and probably would have loved demonstrating his frustration on me. We also saw the sad manic depressed pacing back and forth psychotic leopard, the sleepy moping timber wolf, the brain dead monkey, and the eagle that had no equilibrium and was either about to fall over. Then he would fall on his side and roll around the cage and suddenly would pop up only to go through more swaying sea sick rolling onto getting up again. All zoos suck and I really don’t see the point of any of it, it reminds me of the crying gorilla at the Bronx Zoo that sat in his cage sobbing and refusing to make eye contact. Went home to draw and paint, write and sleep, tomorrow it’s doubling back to Siliguri then on to Kakatrabitra, Nepal the site of a wildlife preserve.