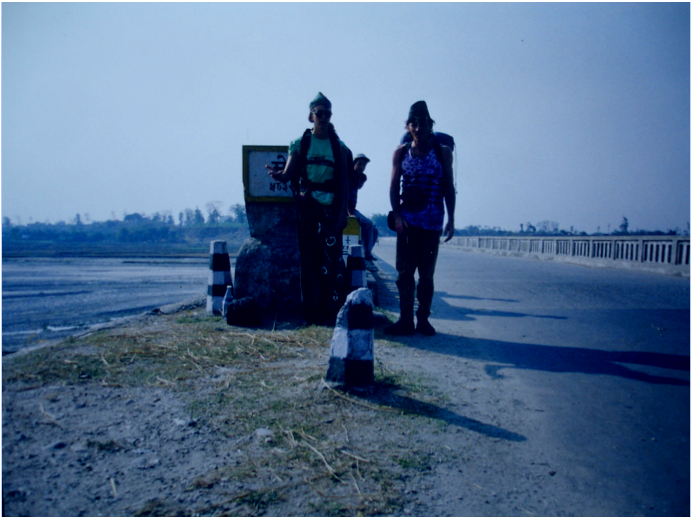 This morning got up and took the bus to Siliguri, from there after a blue turban candle lit lunch in a Punjabi beer hall we taxied to the frontier of Nepal.

And with  a slow  deliberate promptness made it through Indian customs then crossed the one kilometer bridge and then through Nepali customs, we made our way to a tree lined avenue where we found the bank and did our currency change while Sabubu was schmoozed by the clerks.

Afterwards we went off to get our tickets for the bus, Nepal has these old coffin like buses with bars on the window, no escape for the disenchanted and a test of mental strength for the claustrophobic.  The insides are upholstered with velvet, shag carpets, bangles, bells, portraits of Krishna, altars with burning incense. We head to Ithari,  a crossroad dustbin which we reached after 150 kilometers in body numbing five hours, we arrived at night and were able to get some semi decent accommodations at the Nepal Lodge, with Elvis Rajna Ali Presley as the inn keeper. We tried to find some food in the fly infested town but wound up back at the lodge, retiring to grumbly tummies, I wondered how many grumbly tummies were out there tonight.

We got up early, around 7 AM to get a bus, we went out into the square where all the buses were lined up, people walking around, and are waiting for a bus to Kashi Toppu Wildlife Preserve. We got an omelette and veg pakora, two teas, and four pieces of toast with jam for 85C US. Well well well, in the north things are very different, buses break down with stunning regularity but prices are cheap.

Well our bus broke down somewhere a half hour out of town, as the driver and his sidekick decided what to do, as we found out we were waiting  for a replacement part or another bus. So here we were by the roadside, we decided to try and hitchhike and behold we got  whisked away in a large pale green embassador with all the disembarked passengers of the bus looking on in surprise. It was like a movie unfolding,  the driver and navigator were military men in the front seat, and we sat in the back with  Mohan Krishna Kharel, a lawyer. They took us to within miles of our destination to the local police station, chatting about life in Canada and sharing insights about Nepal. As we pulled into the small town a large bee came in a window and all the occupants started to panic, and no matter how I reassured them I honestly thought everyone was going to jump out of the moving car. When we got into town everyone bailed and I got a bee out of the car without harming it, it’s an agreement I have with the bee kingdom to serve and protect all bees in their daily travail.. Many heartfelt thanks were exchanged for the bee extraction service and we thanked them for the comfortable ride.

At the police station we had a lengthy conversation with the chief of police who was more interested in our travels and in Sabu. Our questions about the reserve and our search for the warden at the reserve seemed to be of no interest to them. We left unsatisfied and back out in the heat of the day as we started down the dusty main road until we came to a crossroad with a sign pointing down a dirt road for the two kilometer walk to the Wardens house. On the way we met the assistant warden who told us that the warden was in Kathmandu but to go  on ahead to the office and that he would be with us in a few hours.

Sabu mentioned on how, when we were in Darjeeling that the Head Lama of the Orgyen Kunzang Chökhorling Monastery wasn’t there, but in Bombay and that is why we didn’t get an answer at the door. We are always searching for patterns of events or numerical events to give us clues at what might be coming along or taking place. Coincidence or not?

Well the  OKC Lama is in Mumbai, and the Warden in Kathmandu, and as we have just learned, the Living Goddess will soon make a public appearance in Kathmandu and decided to put that on our itinerary. So we waited in the office, played games, sketched, ate peanut butter, then finally Jan, a Swedish bird watcher arrived and introduced himself and gave us the heads up on what was going on.

He took us on as students and we booked our bird watching times for the next few days.  Soon after a group of people showed up, villagers, it seems some local farmer got pissed off with the game preserves champion elephant’s rampage in the farmers fields, so he had chopped off it’s penis with a machete. Now the elephant went on a rampage and disappeared into the underbrush. They think the elephant could be as far a sixty miles away. It will probably bleed to death, so a search party was being organized to go and get it. To many tigers out there for me to go and look for it, besides we soon would have our own beasts to tend with.

We were shown our room, though it was suppose to be a room, it really did look more like a stable with two impromptu cots set up, a small bench and a candle.  When we got the candles on we realized the room was inhabited by these huge cockroaches , Sabu and I each had our own cot, we played magnetic chess under Sabu’s mosquito net. We put on a kraftwerk tape in order to chill out a bit, and we started seeing more of the large roaches, so on the way back to my cot I decided to thump a few with my shoe. Well, they all started flying around the room and I barely got back under my net in time to witness them assaulting my net revealing large pincers. I hadn’t realized just how nasty these things looked as they continued to hurl themselves on my net. Very uneasy night of sleeping with all clothes on, even a hat.  Tomorrow it is bird watching at dawn with Jan, and swimming in the Ganga tributary.

Up at the crack of dawn and much to our surprise all the bugs had gone as we readied for our bird watching lessons with Jan the birdman of Septa Kosi Camp. We saw over thirty varieties of birds, some river eagles, egrets, a kingfisher that was viridian green with a red beak and orange head. But best of all  we saw a Bee Eater from ten feet away, using a scope, we enjoyed such incredible detail. Then a  thunderstorm chased us back to camp for breakfast of eggs and toast and chai. We did our laundry, and went back out to do some more bird watching till seven when dindin was served. Dahl bat and rice, I already am tired of this food and it has just begun.

Other birds we saw was drongos, cuckoos, ospreys, parakeets, open billed heron, black white kingfisher, Indian darter, then we stayed outdoors to stretch out on a bridge over a gurgling stream and did some star gazing. We went home to settle in for dream until a curious George in the window, woke us up and I had to chase him away.